The Gentleman's Groom Room is Scotland's longest established traditional shaving and male grooming retail shop and occupies a lovely listed building in Dundee City Centre Scotland's fourth largest city. We pride ourselves on being a traditional gentleman's store and as such our product range has been carefully selected to appeal to our discerning clientele. The interior has a retro-apothecary feel with a friendly, professional atmosphere 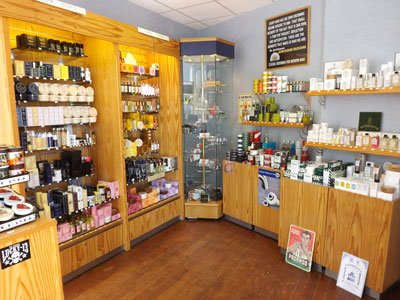 and boasts an unrivalled selection of top quality men's fragrance, grooming and wet shaving products from names such as D.R Harris, Floris, Castle Forbes, Czech & Speake, Simpsons, Muhle, Proraso, Dovo, GB Kent, Musgo Real and the ' 3 T's ' Truefitt & Hill (The oldest barbershop in the world), Geo F Trumper and Taylor of Old Bond Street to name but a few. Also artisan makers from the UK, such as Wickham Soap Co, Phoenix & Beau and not forgetting our own range of products including the ever popular Essence of Scotland line of shaving soaps.

The Gentleman's Groom Room is an independent family business, founded and owned by Ian Thomson an experienced traditional wet shaver for over 40 years with both DE and straight razors. Ian is also fully qualified in the art of the traditional open razor hot towel shave having trained many years ago with the wet shaving expert and master barber at Harrods in London when Mr Al Fayed had private ownership. Ian has a professional knowledge of traditional Turkish wet shaving including singeing and threading and holds a Guild (of beauty therapists) accredited certificate of excellence and merit. This knowledge and expertise in the art of shaving and the 'tools of the trade' (products) has led to Ian helping out on several occasions with production teams from movie studios working on feature films to theatre productions. He was also instrumental in the creation of the Internationally renowned Essence of Scotland range of traditional shaving soaps and The Gentleman's Groom Room own brand products.

The Gentleman's Groom Room Traditional Shaving Shop has over the years built up strong connections with Jermyn Street and St James's London, an area which is synonymous with the finest quality shaving and grooming requisites and the store are official authorised stockists of Czech & Speake formerly of Jermyn St, Geo F Trumper, Floris, Truefitt & Hill , D.R Harris and Taylor of Old Bond Street to which we are also the authorised Agent/Wholesale distributor for Scotland... (An interesting fact is that The Gentleman's Groom Room of Dundee were the first to bring the products of Taylor of Old Bond Street north of the border to Scotland, becoming Taylor's first ever Scottish stockist).

Dundee - 'One City Many Discoveries'

Dundee is situated in the north east of Scotland, set on the banks of the River Tay. At the heart of Scotland The Gentleman's Groom Room is easily accessible from Glasgow, Edinburgh and Aberdeen and located less than 25mins from Perth and St Andrews The Home of Golf in the Ancient Kingdom of Fife.

The Gentleman's Groom Room would like to warmly welcome you to our shop anytime you may visit the city or surrounding area. For those where this is just not possible, we hope that you enjoy using our website.